We love hearing about how our products help your pups! Let us know how your four-legged friend’s health improved and we’ll send you some more of our creations for free. 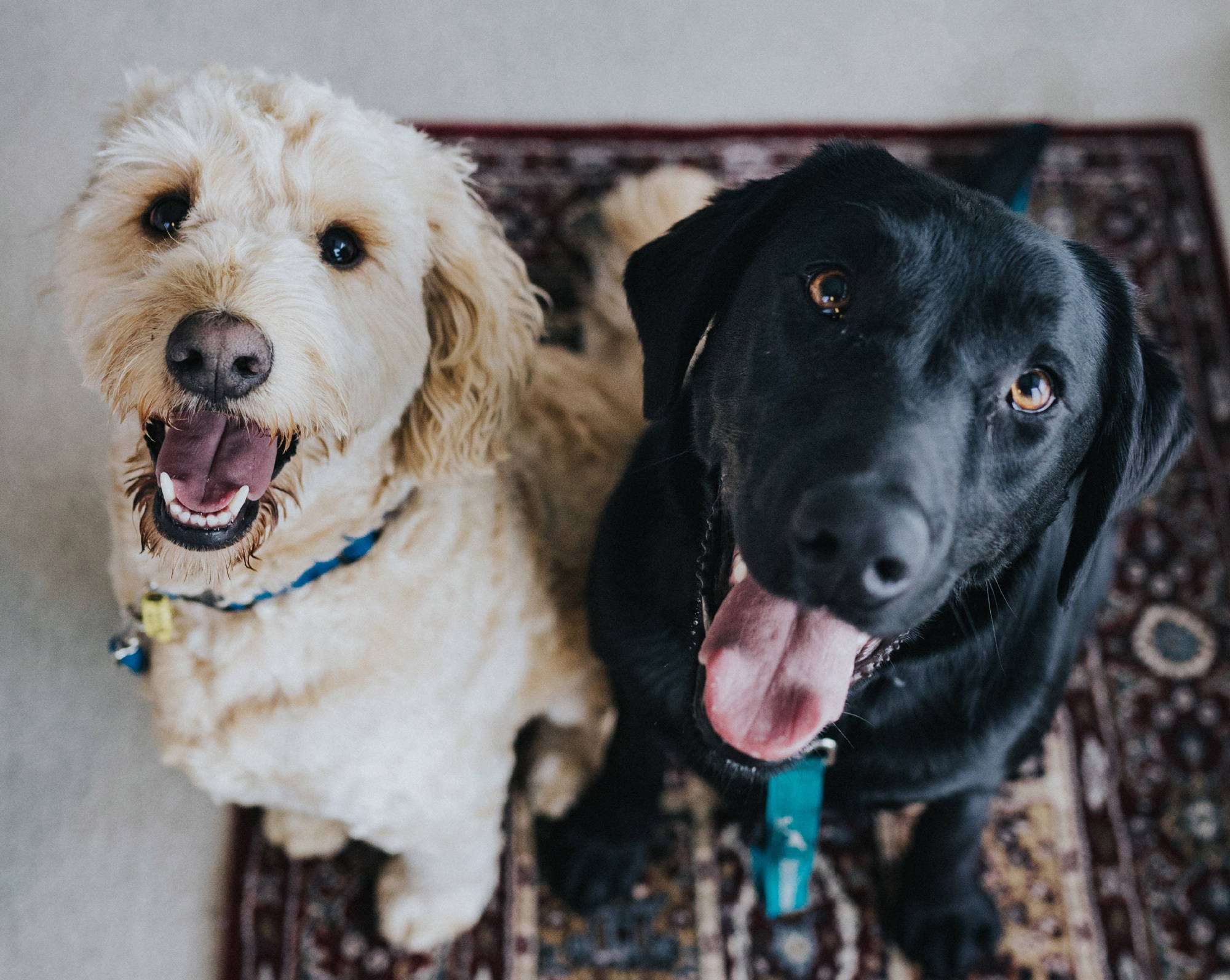 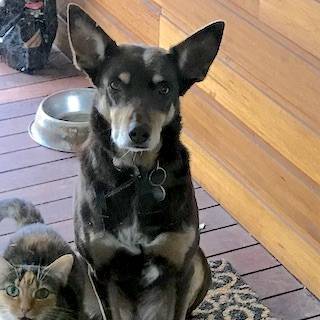 My Kelpie (who is 9 years old now) has barked at night nearly every night her whole life...within 48 hours of using this hemp oil she has slept through every night... we couldn't believe it!!! So testing the boundaries, I took her off it for a couple of days and the following night she again woke at 1am barking and so on for a couple of nights... Safe to say she is now back on the oil again, and we are all sleeping peacefully!

My 7-year-old Labrador has had a knee replaced a couple of years ago and as this winter rolled in the coldness really hit her. She became stiff when getting out of her bed and not moving as well. I noticed after using the Hemp oil she became a lot more agile when moving!

My 2-year-old Retriever came from a rescue home, and after having him for a couple of months he became aggressive towards other dog, he had had 4 treatments of acupuncture to open the channels up and then we tried your Hemp Seed Oil For Pets. After 10 day we noticed a difference; he was becoming more placid and softening in his attitude. He calmed right down and is now able to enjoy the dog park with no stress or anxiety. 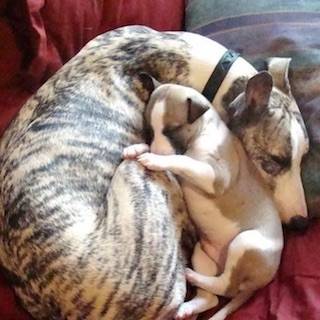 We have a 17-year-old greyhound. She has a little Arthritis but otherwise okay. Then she began having seizures…the vet suggested she has had a good innings, you can guess the rest. Our dog is happy and otherwise fine so we decided to try medication. Well…on the medication she couldn't walk, kept falling over and we were having doubts about our decision. A workmate suggested we try your Hemp Seed Oil so with nothing to lose except our beloved family member we ordered some. That was about a month ago. We took her off the medication and started her on the Oil. She now thinks she's a puppy again, back to her old self! Running around, chasing the ball and the other dog. We are so grateful to that workmate and of course The Cannabis Co for giving her life back, for whatever time she has. 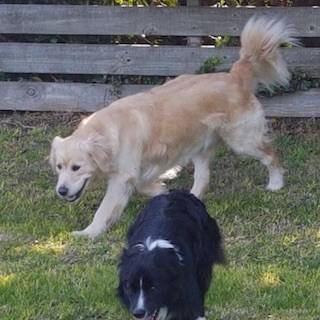 My 2 year old retriever is from a rescue home. After a couple of months he became aggressive towards my other dog shown in this photo. If he was tied up and saw a dog walk past our yard, he would snarl and try and get loose. Then we tried the Hemp Seed Oil For Pets, after 10 day we noticed a difference he was becoming more placid and softening in his attitude, he has calmed right down and is now able to enjoy the dog park with no stress or anxiety. 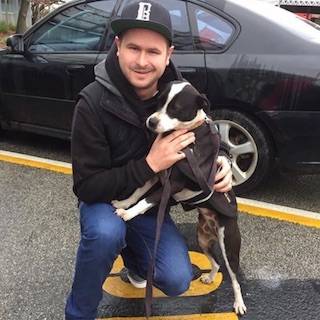 This is Gemma. Gemma is an eight year old Staffy cross Whippet. I have had her since six months old when I picked her up from a dog rescue group. When she was five she was diagnosed with advanced arthritis. She has had several treatments and different dietary changes to try and help her with knees, with minimal results. In the past couple of months Gemma has started on Hemp Seed Oil For Pets from The Cannabis Co. We have been seeing some positive improvements in her mobility after about a month of daily use. During cold winter nights is when her mobility is at its worst but since she has been on the hemp seed oil she has been moving with more agility and speed. I highly recommend this natural approach to health and wellbeing of your four-legged best friends. 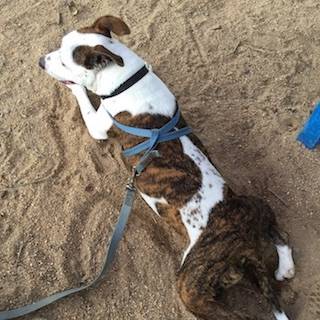 My dog Buddy has congenital hip dislocation and as he has aged it had begun to cause him problems. Often unable to weight-bear and he was limping. The anti inflammatory medication prescribed by the vet just made Buddy depressed and he stopped eating. I had tried him on turmeric, black pepper and olive oil which helped a bit but the Hemp Seed Oil For Pets has been amazing. After 5 days there was only a hint of a limp and today after 7 days it has almost gone. 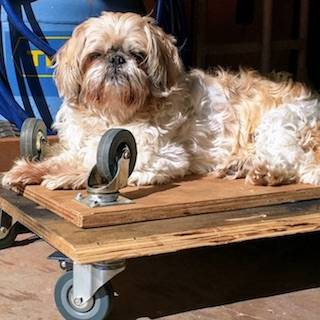 Our dog Odie, was first diagnosed with arthritis, but later, after we discovered him dragging his back legs, that it was actually an enlarged disc. Placing pressure onto his spinal cord, hence prohibiting him from useing his rear legs. He was proscribed a course of potent anti-inflammatories, which worked to a certain extent. However the vet sent him home to us with a pamphlet, explaining end of life scenarios for our pet. It was then we discovered The Cannabis Company and ordered our first batch of Hemp Seed Oil for pets. Odie is now like a new dog. He is playing with our seven month old puppy now and goes on walks with us around our suburb. There is no doubt that Odie still has an ongoing spine problem, however the Hemp Seed Oil For Pets allows him to function pain free. 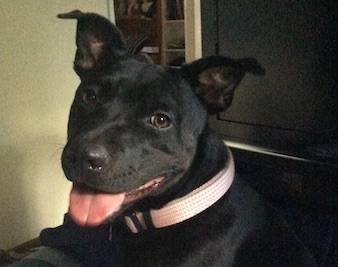 My 2 year old kelpie/staffy cross, Zoey, has severe separation anxiety, and has issues sleeping, as she alerts at every noise. After 2 days on the Hemp Seed Oil For Pets, she is now sleeping like a baby! She’s so much calmer, overall, able to be on her own without crying constantly. Her dry skin has improved, she is shiny and healthy. Could not recommend this more highly. 100% satisfied customer! 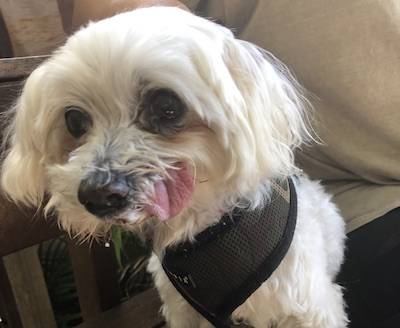 Our almost 16-year-old rescue dog Guinness has degenerative joint disease in his hips, and a recent fall caused his arthritis to really flair up and he started dragging himself around instead of walking. The vet put him on anti-inflammatories and pain relief, which made him wobbly and very sleepy and he wasn't himself. We thought we were going to lose him. The meds eventually caused diarrhoea as well and at this point I did some research and started him on the Hemp Seed Oil For Pets and he's now walking again without being wobbly, his appetite is back, and he's back to his old self again. We couldn't be happier with his progress after just a few weeks! 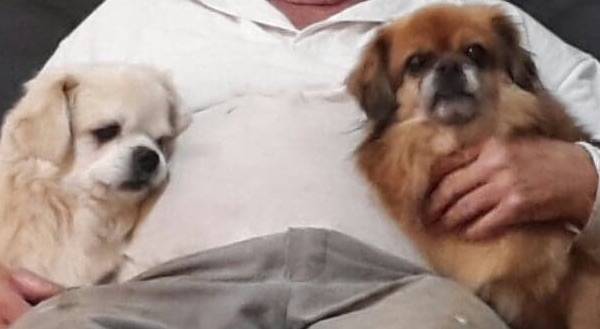 We have 2 x 15 year old Tibetan Spaniels, both showing their age and on heart medication. Within a few days of taking Hemp Seed Oil For Pets we noticed much more activity from them both, with the little girl, Emily, bouncing around like a puppy, wagging her tail and Bossy, the boy, actually 'supermanned' off the veranda. He didn't just jump off the 3 step high veranda he ran and leapt into the air like superman lol. I had forgotten to give them their heart meds one night and usually Emily is coughing from fluid build up but no coughing so we just watched them over the next few days. Last night Emily gave a cough so I gave her her medication, just in case fluid was building. We are so incredibly happy with this product. Thank you. 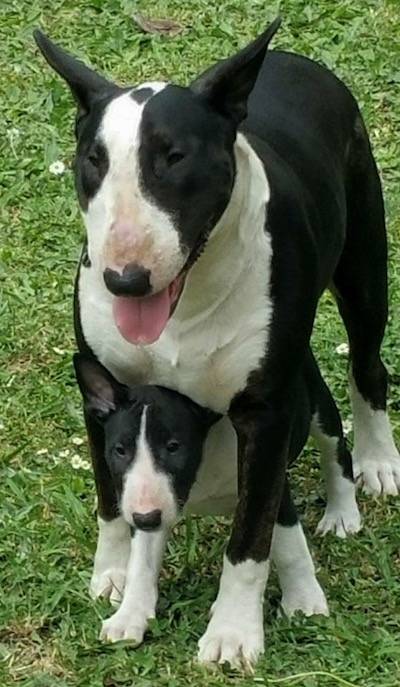 We breed and show Bull Terriers and have for over 20 years. We have Bender, who’s a Brindle and white 12yo. He has fairly advanced arthritis, which makes it hard for him to go down even a couple of steps. Since we've had him on Hemp Seed Oil For Pets he’s improved HEAPS. He now easily gets up and down the steps, to the point that he often trots up and down, and sometimes even jumps up!

Then we have Sid. He's almost 5.5yrs old, he’s white with a brindle eye patch. Being a white dog, he’s always getting rashes and grass allergies. The Hemp Seed Oil For Pets has helped a lot this summer season and he’s had no itchy spots at all.

Then there's Marley, our 4 year old black brindle and white. We put her on the Hemp Seed Oil For Pets after having her last litter as her coat was dull and wirey. Now it's glossy again. She had another litter nine weeks ago, her coat didn't lose its shine at all during this pregnancy. We continued to use the oil right through her pregnancy and have even added it, in diluted form, to her pup (now weaned).

I started our Bullies on the Hemp Seed Oil For Pets when a friend, who buys from you for his cats, donated a pack for me to use as a raffle prize at our annual Relay For Life fundraiser. The person who won the pack gave it to me as they didn’t have pets... SCORE! The rest is history. I’ve recommended your product to friends, but as yet I don't know if they have purchased it or not. Their loss if they haven't! 😂 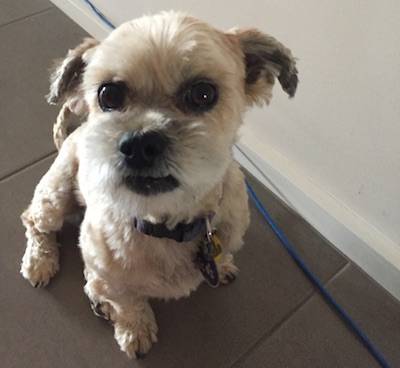 My dog Cujo developed arthritis at 11. He had issues with joint and muscle mobility and seemed to have a limp that migrated from leg to leg on a consistent basis. He also lost his appetite and getting him to eat his dinner was a struggle.

He is now 12, and about two weeks ago I tried the Hemp Seed oil for pets and noticed a drastic improvement very quickly. His limp is completely gone, his appetite is back, he gets excited again and has got all of his bounce back.

This little product is a miracle and I’ve ordered two more bottles.

< Back to all Testimonials 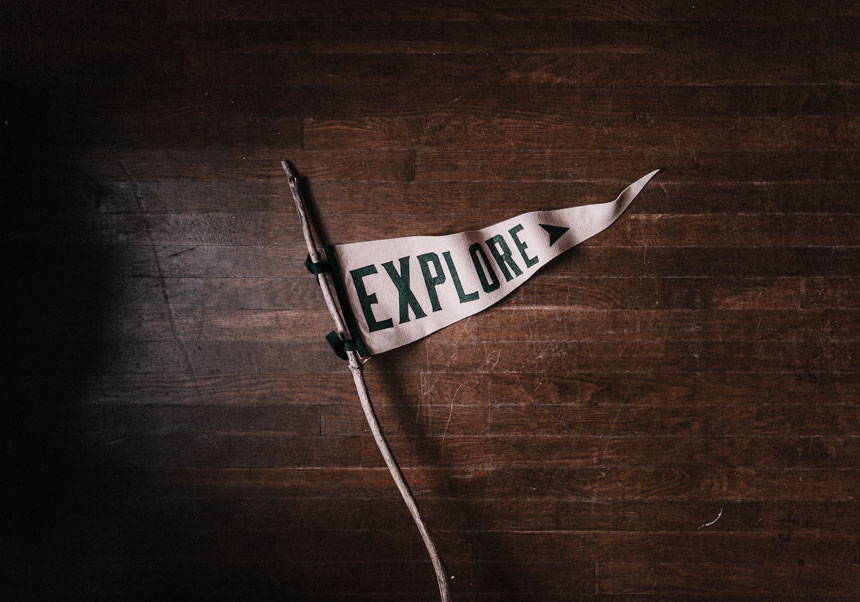 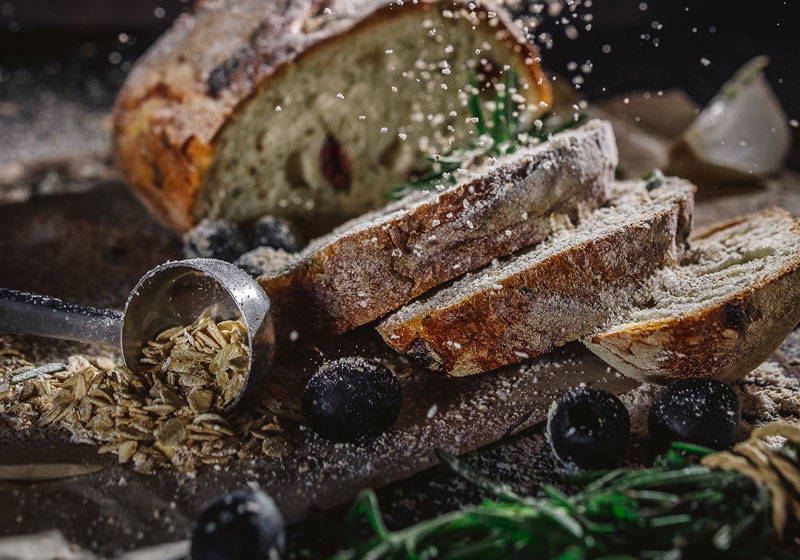 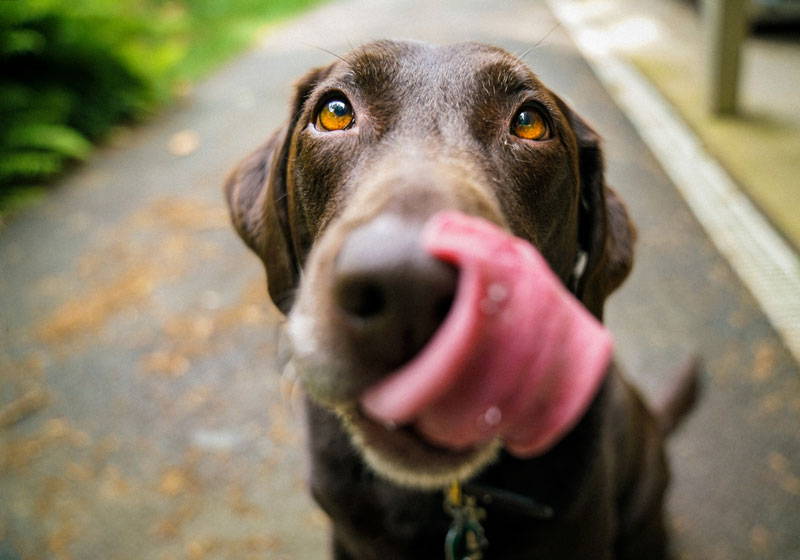 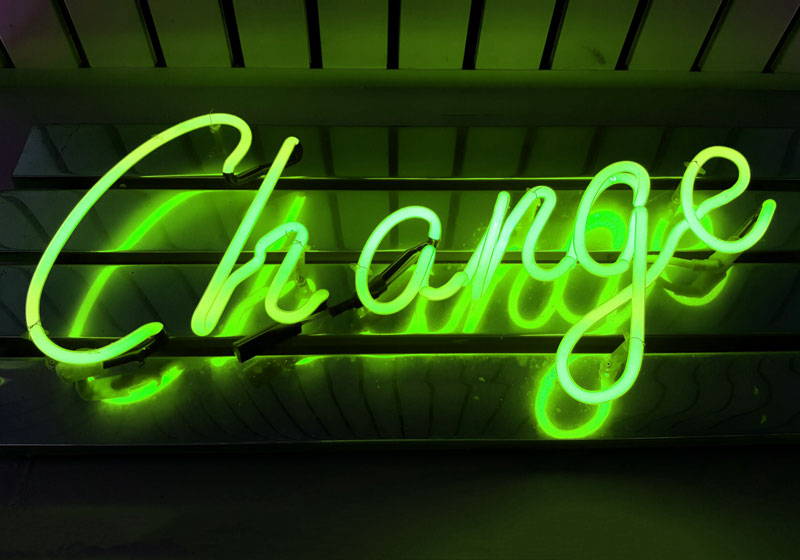 Get Social With Us.