Transdermal Hemp Patches BACK IN STOCK!

HIGHER OIL FOR THE MIND, BODY AND SOUL

Hemp Seed Oil is considered THE most balanced oil in all of nature. For nutrition, it is unparalleled. Used for both food and body care, whether you eat it or massage it into your skin, Hemp Seed Oil provides a range of necessary nutrients and helps prevent a variety of common diseases. We're so certain you'll see a difference before the end of the bottle that we're offering a Money Back Guarantee.

Hemp Seed Oil contains two essential fatty acids: omega 6 and omega 3. They’re “essential” because our body cannot make them, so we need to have them in our diet. They’re necessary for cell and body growth, maintenance of cell membranes, reducing inflammation and keeping our hearts healthy. Unlike other common sources of omega oils, Hemp Seed Oil provides the right balance of omega-6 to omega-3 in a 3:1 ratio. This means your body can properly absorb it, as without the right balance, it can actually be detrimental. Our hemp seed oil contains Vitamin E, an antioxidant which helps protect your cells from free radicals. It also contains plant cholesterol, which reduces bad cholesterol in your body and helps regulate your weight. Our cold-pressed Hemp Seed Oil also provides a ton of other beneficial nutrients.

When you eat Hemp Seed Oil, all you need is one teaspoon a day. This will meet your daily needs for all the nutritional goodness contained in those wonderful little hemp seeds. Use hemp oil in smoothies, salads, vegetables and pasta dishes. To conserve the essential fatty acids, we suggest you use it raw or gently heated. Hemp Seed Oil is also great for external use. It alleviates dry skin, strengthens nails and heals cuticles, helps relieve joint pain, works well to remove makeup, as a facial mask, it reduces acne and relieves eczema, and it's even an excellent hair conditioner! 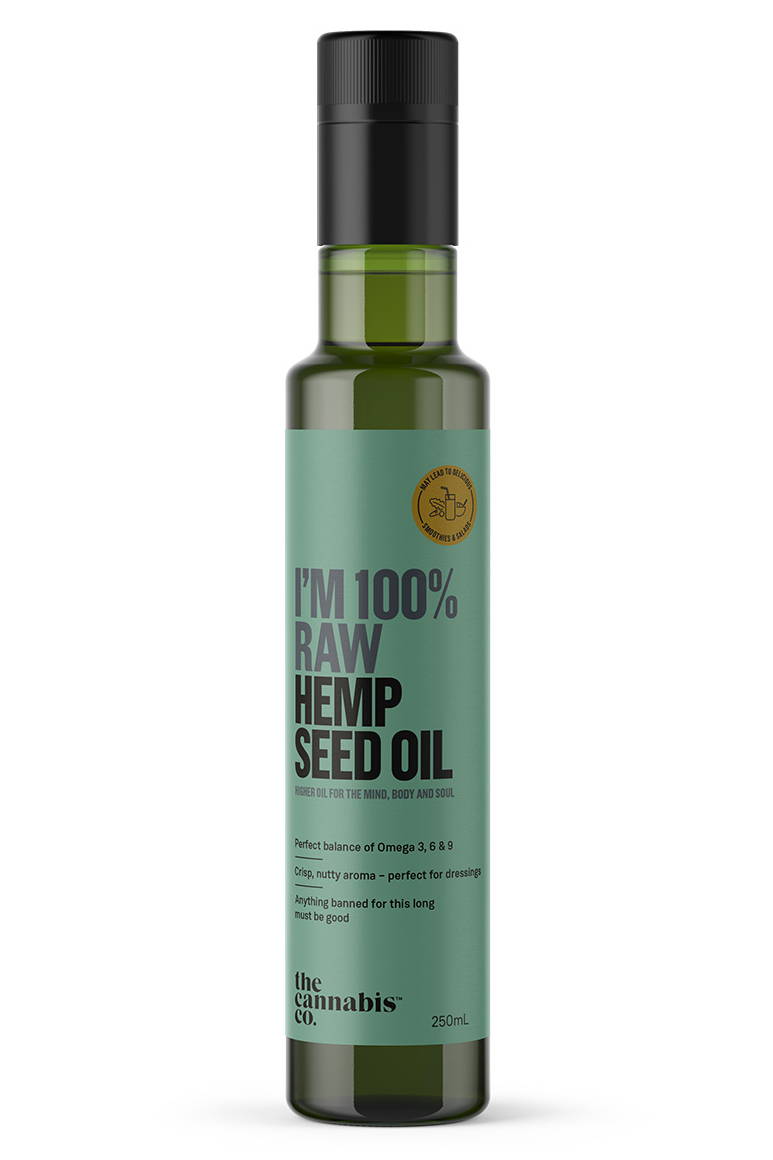 Like Melbourne, The Myrcene contains the perfect balance of the earthy and the fruity. That’s why we selected it as the backbone of our Hemp Gin, granting the name pride-of-place on our initial foray into the spirit world. Myrcene is the most abundant terpene found in cannabis, terpenes being the primary constituents of the essential oils in many types of medicinal plants and flowers.

Bubblegum aromas blend with lavender, pine forest and sage. Soft tones of violet interact on the palate with woodland flavours of rosemary and resin, cloves and woody spices. With a long complex finish and a rich mouthfeel, The Myrcene is perfect paired with a premium tonic. Try it poured over a wedge of lemon with a sprig of fresh rosemary to really bring out those piney aromas.

Small-batch crafted in Healesville, this complex gin represents the marriage of past and future. The world’s first hemp-infused gin distilled with terpenes – The Myrcene.

Myrcene is known to compose up to 50% of the total terpene content found in individual strains of cannabis, with Myrcene strains reputed to produce joyful and euphoric effects alongside an overall feeling of relaxation. Myrcene is perhaps the most highly-valued terpene due to its ability to ease symptoms of chronic pain and inflammation.

Myrcene is known as an anti-bacterial, anti-diabetic, anti-inflammatory, anti-insomniatic, anti-proliferative, antipsychotic, and anti-spasmodic. Cannabinoids have been demonstrated to absorb more efficiently into the blood brain barrier when terpenes are present, allowing them to bind to receptors in the endocannabinoid system. This is usually experienced as an analgesic response – in other words, myrcene is a painkiller which destroys harmful bacteria, lowers glucose levels in your blood and reduces swelling; a great outcome for those who suffer from auto-immune conditions. Although further research is needed, it appears that Myrcene may reduce the spread of cancer cells, especially when paired with CBD, which naturally suppresses the proliferation of excessive cells and helps reduce the size of tumours. Myrcene is likewise reputed to contribute to improved mental health and help with IBS.

Interestingly, just like cannabis, Juniper berries are valued for their anti-inflammatory properties, ideal for relieving pain due to rheumatism and arthritis. The Greeks used the berries in many of their Olympic events because of a belief that the berries increased physical stamina in athletes, while juniper berries were also used in traditional medicine for female birth control. By the mid-17th century, Dutch and Flemish pharmacies sold gin made with juniper, anise and coriander – all of which are used in the distillation of The Myrcene Hemp Gin. These old-school pharmaceutical gins were used to treat medical problems such as lumbago, kidney stones and gout – just like cannabis in Ancient China.

The Myrcene is perfect paired with a premium tonic. Try it poured over a wedge of lemon with a sprig of fresh rosemary to really bring out those piney aromas. If you really want to get fruity, explore The Entourage Effect! 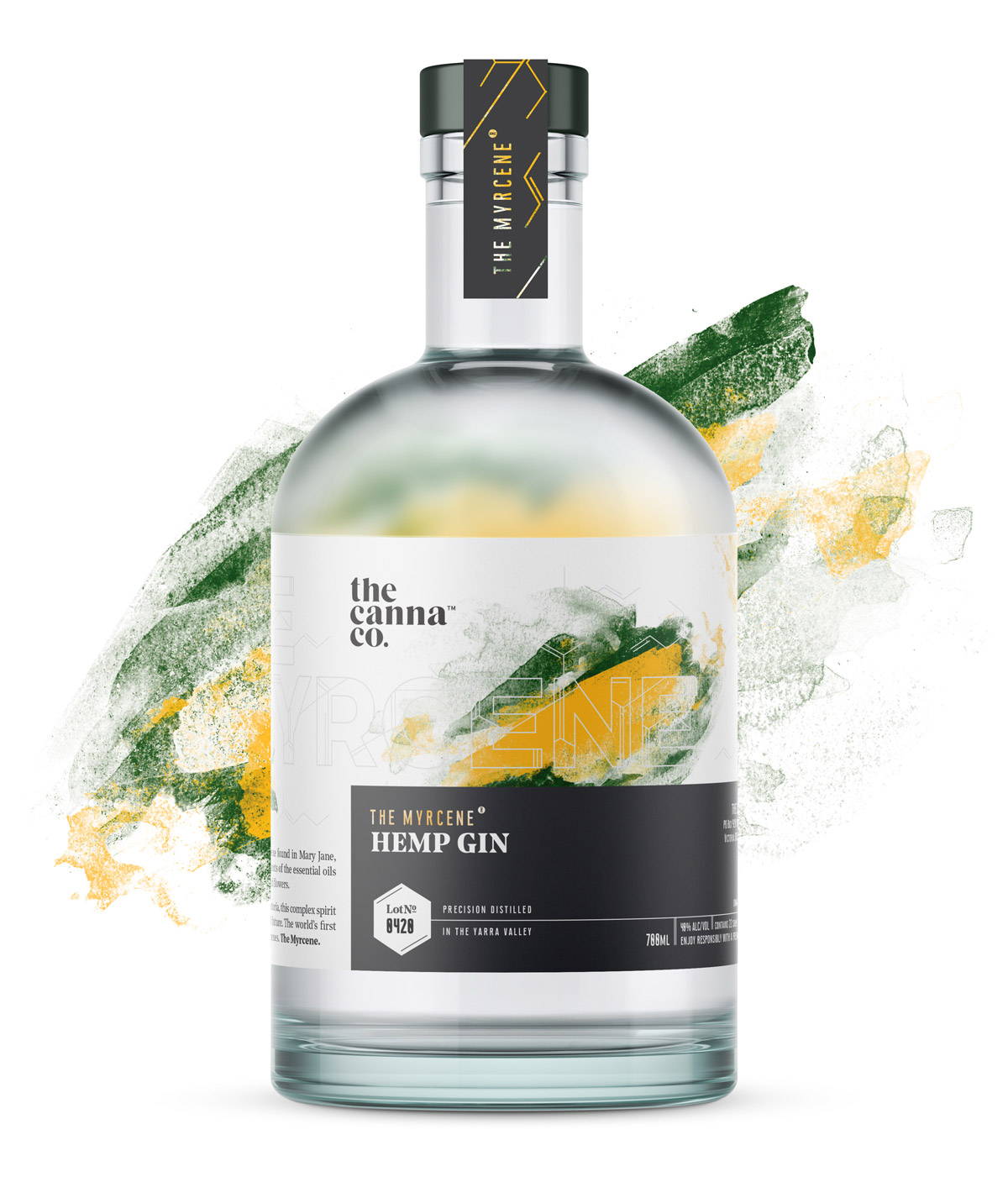 A long-standing dream comes to life with the release of our second gin. Through a finely wrought blend of Australian native botanicals with the cannabis terpene Limonene, we seek to capture the flavour of our deep, complex and conflicted emotions about this beautiful country.

Both aroma and taste are super fresh. On the nose, an aura of the Kimberley’s Twin Lakes region comes to mind, scents of jilungin and wild lemongrass bringing forth a refreshing coolness reminiscent of a wetlands breeze on a hot summer’s day. Citrus elements of finger lime intertwine with cinnamon myrtle, while a heavy dose of juniper and coriander keep the spirit firmly entrenched in the tradition of a truly classic gin.

On the palate, exotic notes of spice interact with a deep earthiness. Hemp’s naturally nutty flavour interacts with native botanicals to bestow an almost hazelnut quality upon the gin, brightening up a rich fullness to the mouth feel. Add tonic to your glass and experience the uniquely colourful bouquet of Native Australian wildness.

50% of profits from the first release of this gin will go towards education around traditional land management techniques in the Kimberley.

In studies by The University of Queensland, Jilungin has been demonstrated to contain over 30% more antioxidants than Green Tea, and furthermore has demonstrated anti-anxiety properties which are the subject of ongoing research. Griffith University in New South Wales has confirmed that Native Wild Lemongrass is comparable to aspirin in its effectiveness at treating headaches and inflammation. Limonene is reputed to aid with anxiety, depression and provide stress relief, while digestive issues may be improved through limonene’s potent antibacterial and antifungal effects. It also boasts powerful anti-inflammatory and antioxidant properties. 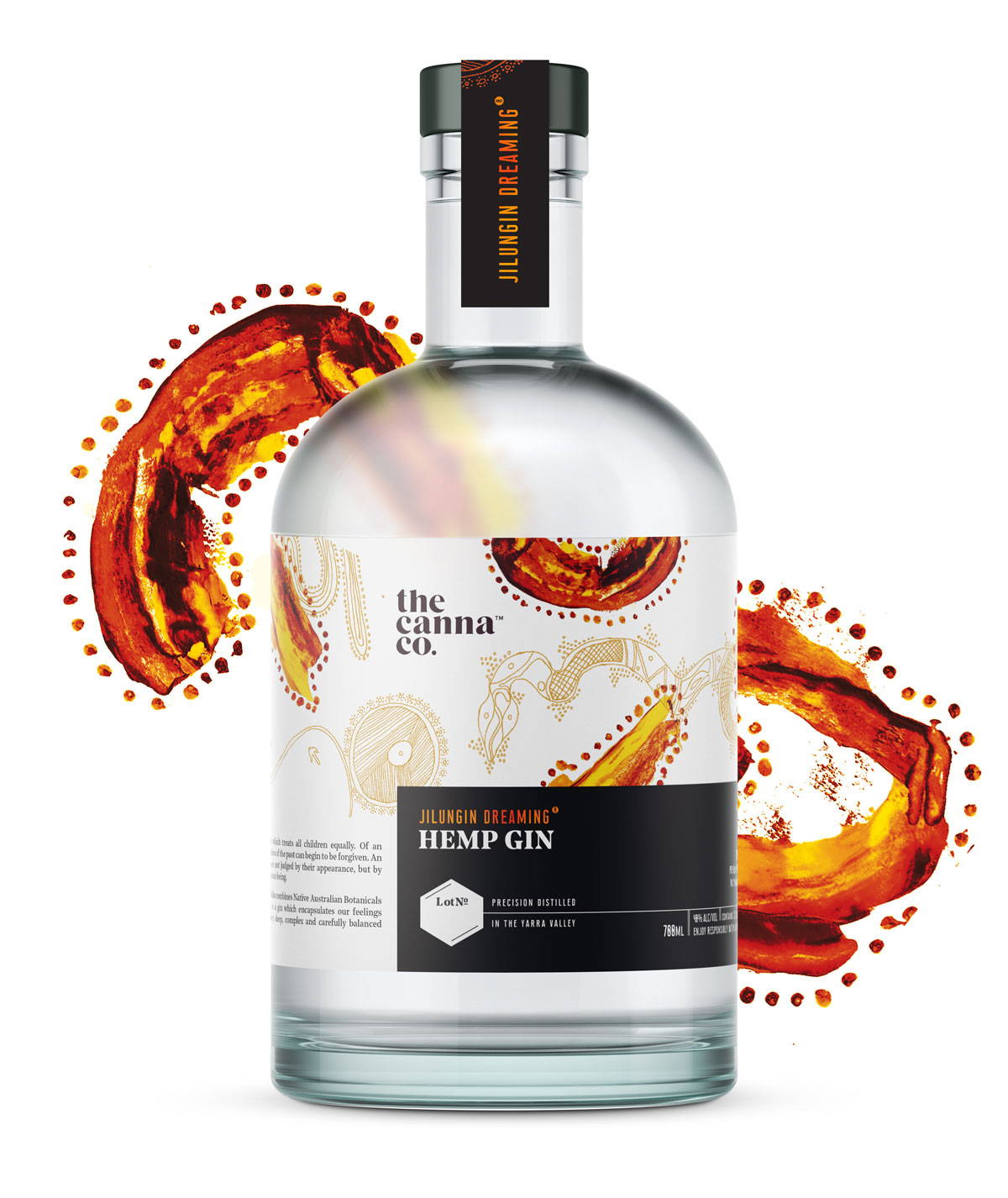 One of nature's best sources of strength, hemp seeds provide us with high-quality plant protein. This high-fibre protein supplement can be used to enhance total protein intake for vegans and non-vegans alike. Hemp is considered a superior protein source due to its above-average digestibility, which makes it ideal for athletes.

Hemp Protein is packed with branched-chain amino acids, which are vital for good health. With a much stronger nutritional profile than pea protein, our Hemp Protein powder contains all 20 amino acids, including the nine essential amino acids that your body is unable to produce on its own and must obtain from dietary sources. Amino acids are the building blocks for all protein in our bodies, and hemp provides them in a perfect package for maximum absorbability, meaning you get the most from your protein intake.

Containing albumin and edestin (both classified as “globular proteins”), Hemp Protein is superior to other protein sources for promoting muscle development since it’s so easy to digest. Hemp protein is also free of oligosaccharides, substances which can cause gas and stomach upset.

Additional benefits of hemp protein include immune-enhancing and anti-fatigue properties. Hemp protein powders are rich in fibre, a nutrient that has many valuable health-promoting properties. It’s a good source of iron and calcium and also contains a variety of other nutrients, including B vitamins, magnesium and vitamin E.

Hemp protein can be added to many foods, smoothies or baked into food as an ingredient. 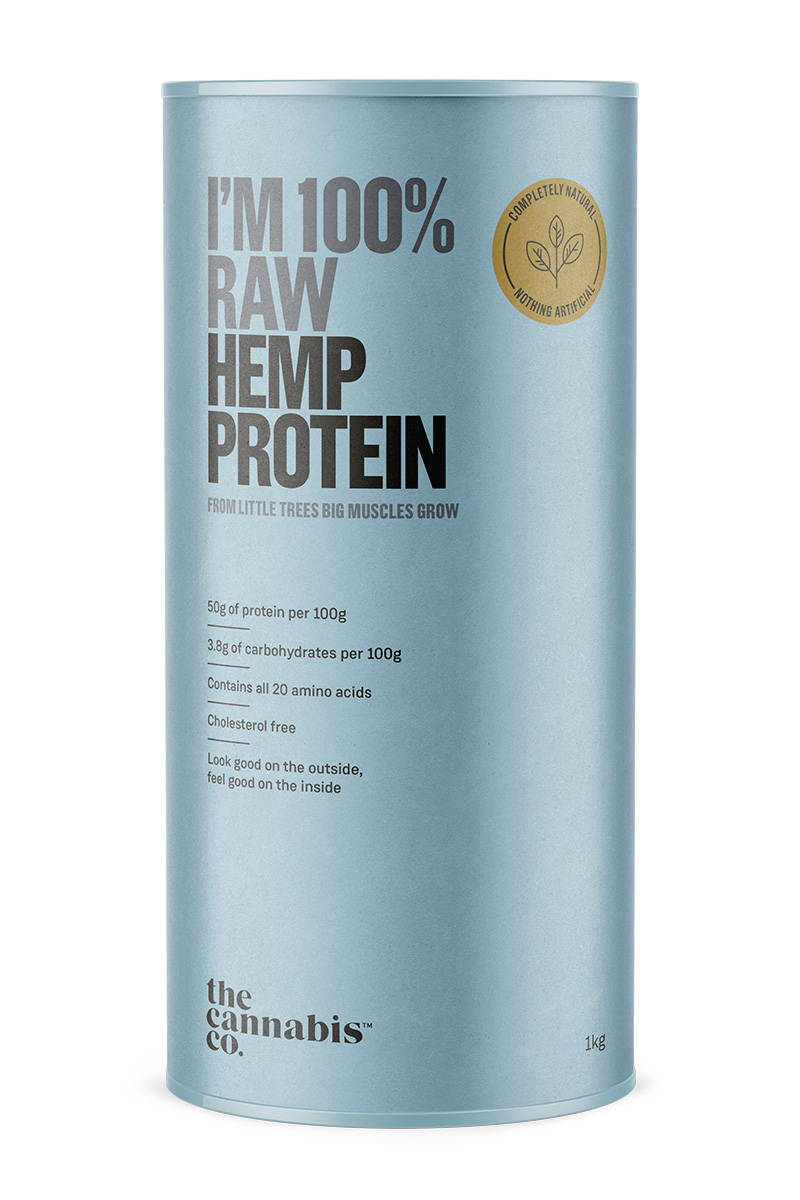 THE HEALTHIEST ALL PURPOSE FLOUR IN THE WORLD

Health-conscious bakers dream about our Hemp Flour! Plant-based and naturally gluten-free, Hemp Flour is a versatile All-Purpose Flour which is much better for you than boring old white flour (and contains more than double the protein content). With a delicious nutty flavor, it’s an excellent addition to dishes both savoury and sweet.

Use as a substitute for any recipe that requires all-purpose flour. Remember though, if you're using it for bread or anything that needs to rise, you'll have to mix it with another flour at a ratio of about 4:1. 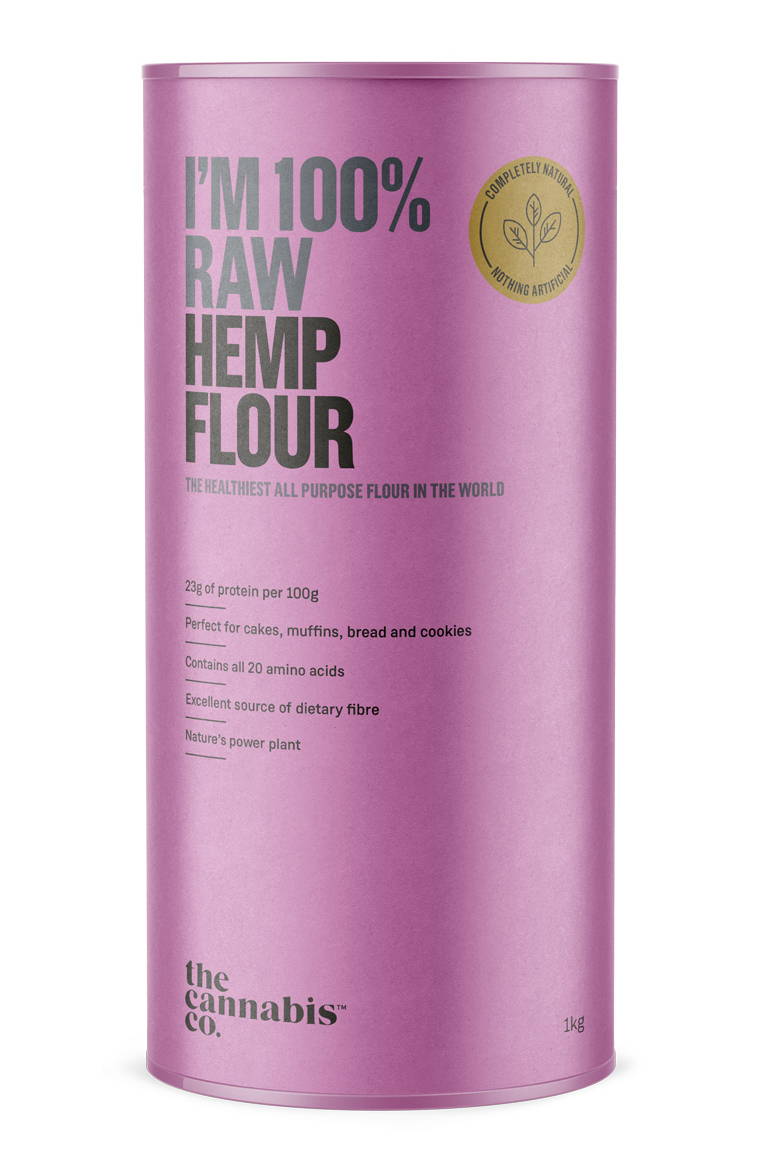 A MAGAZINE FOR CANNABIS LOVERS

"Broccoli is the international magazine created by and for women who love cannabis. Offered free of charge, Broccoli explores and shapes modern stoner culture by looking at cannabis through a global art, culture and fashion lens. Broccoli gives cannabis a dedicated space to be discussed in a fresh, stylish and approachable new way."

We are absolutely head-over-heels in love with Broccoli. The high level print quality and design aesthetic are matched by the insightful, humourous and thought-provoking content, which is unsurprising considering the magazine is the brainchild of Anja Charbonneau. The former Art Director of Kinfolk Magazine has brought her impeccable design credentials to this new venture and the results are excellent.

The Cannabis Company feels a strong affinity with the project and purpose of Broccoli Magazine, as they are likewise committed to elevating cannabis from its somewhat hackneyed characterisation of yesteryear while maintaining the easygoing outlook central to our culture. We're honoured to help spread the word in our little corner of the world.

*Note: although the magazine is free of charge, the cost of shipping it to Australia came (quite hilariously) to almost exactly $4.20 per copy. As such, that's what we're charging for it. We would recommend ordering together with some friends in order to minimise additional shipping charges, or alternartively, order the magazine together with other products to get best value.

Herbal relaxation methods are highly recommended as an accompaniment to Broccoli Mag. 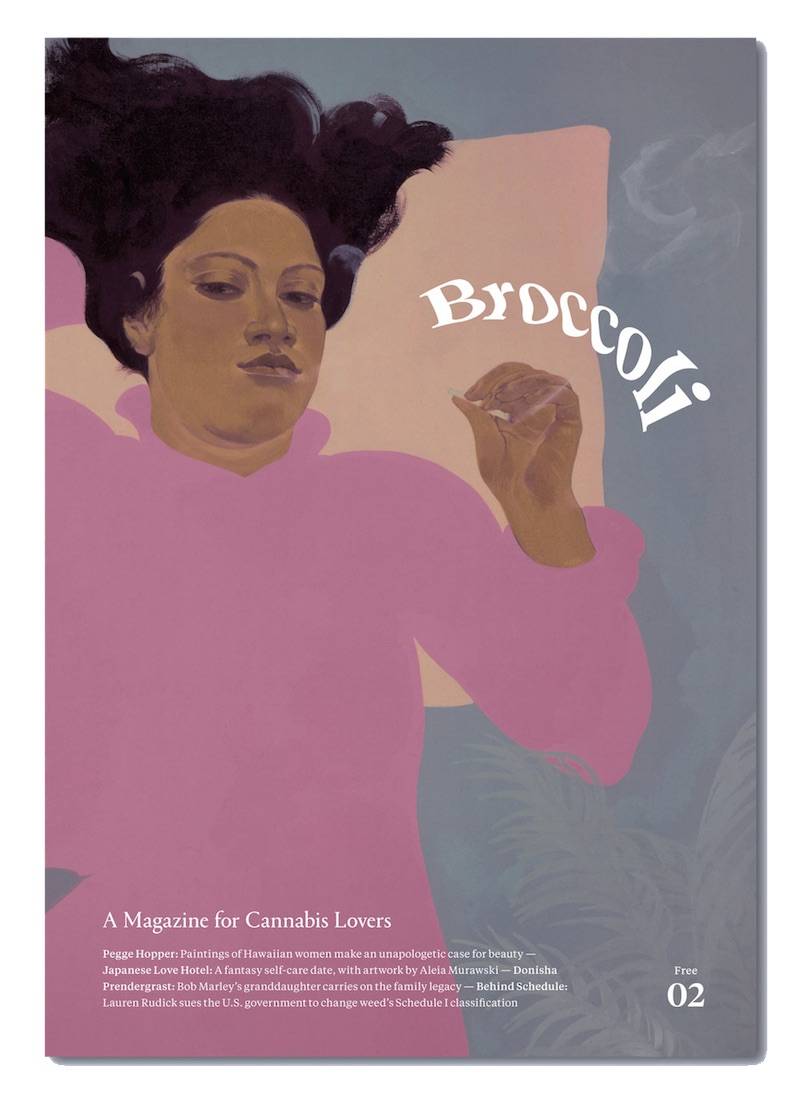